From Thailand to Singapore….

First order of business… Find my best friend Amanda at Singapore airport! Amanda was flying in from London and I was arriving from Bangkok so we decided to meet at the huge slide at T3. It’s the world’s tallest slide in an airport, standing at the height of 12 metres high or four storeys tall and reaches top speeds of up to 6 metres per second. This is one of the many reasons why Singapore’s Changi airport has been voted as the world’s best airport for the past three years. Some of the other amazing features of the airport are the lavish indoor gardens, the rooftop swimming pool, the on-site movie theatres as well as napping areas in every terminal.

After locating Amanda, our ‘Samanda’ adventure in Singapore was ready to begin!

The hotel we stayed in was right in the middle of Singapore, near the famous Orchard Road. A shopping mall called Orchard Gateway featuring many eateries and shops was linked to the hotel, and the MRT station ‘Somerset’ was also next door so we had very convenient access to the whole city.

The hotel itself was very cosmopolitan, clean and modern. No complaints at all – A good hotel choice (even if I say so myself). 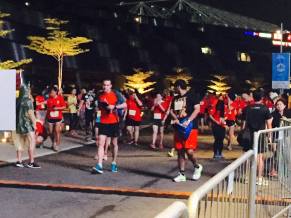 Amanda decided she wanted to participate in a 10k race as part of the Southeast Asian Games (also known as the SEA Games) which is a biennial multi-sport event involving participants from the 11 countries of Southeast.

The race was scheduled to take place right before the formal SEA games marathon, so the start time for this 10k was 6am!! The starting line was at Singapore Sports Hub, which is about 3 miles away from our Hotel, and there was no public transportation running that early. Sooo I was dragged out of bed at 4am so we could walk 3 miles to where the race was taking place. Amanda did her thing while I waited by the river capturing the breathtaking views. Then there was a massive downpour of rain and I got soaked. Obviously the runners did as well but I think they all appreciated it much more than I did. 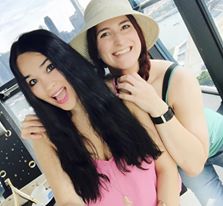 On the way back we stopped at a cute breakfast stall, and Amanda ordered some French Toast that was served with some odd green-goo topping. To this day, we still have no idea what it was. 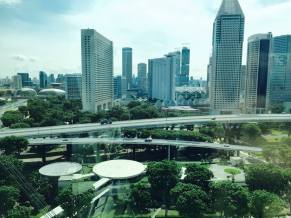 After drying up and getting a bit more sleep we went to the Singapore Flyer which is Singapore’s version of the London Eye. We had booked a high tea package which included coffee and cake. We shared the pod with 2 other guests, as well as a waiter who made us tea and coffee on demand. We were able to see pretty much the whole of Singapore from the top. It was like a map of the city. The revolution lasted 30 minutes in total.

Our next stop was Singapore’s legendary Chinatown which is a bustling mix of old and new, filled with traditional shops and night markets as well as cool stores and cafes. We stopped to get some snacks and drinks, which later became dubbed as dinner, and did some shopping for some souvenirs which were much better value than the souvenirs we had seen elsewhere (e.g. at the Flyer). 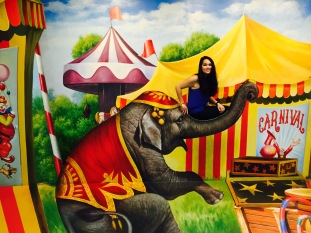 Sentosa Island is home to an exciting array of themed attractions located throughout the manmade island.

We purchased a fun pass which allowed us entrance to 5 out of 20 of the attractions included in the deal.

We opted for the following:

Segways – This experience was only around 20 minutes long and I was very nervous about doing it as you have to control it by using your own body weight. Luckily neither of us fell off at any point so no major embarrassment occurred.

Trick Eye Museum – Short for ‘Trick of the Eye’, which refers to an art technique that turns two-dimensional paintings into three-dimensional images through the use of optical illusions. With that, 2D paintings on the museum walls, floors and ceilings appear to pop out of the surface and come to life.

I have been to a similar museum in Manila, Philippines previously (on my ‘Manila – Attractions’ blog post) and this was pretty much the same in terms of concept but not nearly as good. The artwork wasn’t as striking and there were too many people inside a small space. The designs were all squashed together so you were always in someone’s way. I would still recommend going to ‘Trick Eye’ but ‘Art in Island’ in Manila is much better!

SEA Aquarium – This place is much more than just an aquarium. The entrance to the aquarium is a small maritime museum of South East Asia, and when you first walk in you’re greeted by a gigantic ship surrounded by an amphitheatre with this frightening dragon-esque animated head mounted on it. It terrified small children. Literally, there were kids in the audience crying. Afterwards a movie was projected onto the ship, but we didn’t stay to watch it (shame on us!)

Instead, we opted to partake in a typhoon simulator! We purchased an additional ticket (about £1 each) to experience what it would have been like to sail in a small cargo ship during a typhoon in ancient Asia. Spoiler alert: It does not end well for the crew!

After you get through the museum, you head down into the basement where there is a full and proper aquarium! Amanda loved seeing all the different species of aquatic life, whilst I am not particularly interested in fish (except for the dinner variety) so I can’t say I enjoyed it quite as much.

Skyline Luge Sentosa – Luge was a gravity thrill ride with a unique braking and steering system so you can choose to take a leisurely cruise or race down the 688 metre Dragon trail or 628 metre Jungle trail – 1.4 kilometres. Beforehand or afterwards you can board the Skyride for a scenic bird’s eye view of Sentosa Island, Singapore city Skyline and South China Sea. 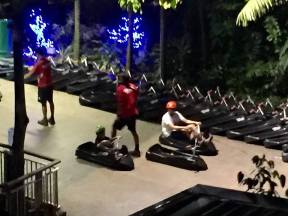 4D Adventureland – There were a few options for the 4D adventureland that were different types of “rides”, and we opted to experience the Log Ride which was a simulator. The adventure took place in a large theatre, with sets set up in multiple moving cars (I think there were about 12 cars which seated about 9 people each). Because we saw the last showing, we got a whole car to ourselves!

We expected the ride to be similar to a log ride at a theme park – you know, around some pretty bends and then down a big slide or some such. Not the case. You were the log and you were being taken downstream by a logging company. Lots of fast paced streams, drops and power tools.

If there had been small children in the audience, I’m sure they would have been terrified. For adults though, it was great fun! The car you were in was constantly moving, and they also used water sprays to totally engage your senses. I would definitely go back!

This was our chill day. We went around the shops in the Orchard Gateway shopping mall located next to our hotel. Afterwards we spent some time in our hotel relaxing at the rooftop pool.

Around noon we headed to the MacRitchie reservoir to do the Treetop Walk. This is a highlight of several long hiking routes in MacRitchie that brings you through the different stages of a mature secondary forest. It’s the first of its kind in Singapore and has a free-standing suspension bridge connecting the two highest points (Bukit Peirce and Bukit Kalang) in MacRitchie and offers a bird’s eye view of the community of plants and animals that live in the forest canopy. The total length of the walkway is about 250m and its height from the forest floor varies, with the highest point at 25m. 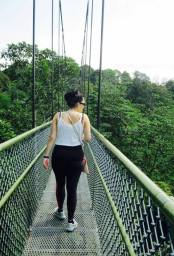 This was something we had been very much looking forward to, although we didn’t anticipate the monkeys would be trying to get food off us. It was quite funny when one monkey grabbed Amanda’s bag and she had to wrestle the monkey to get it back. Suddenly the monkey’s gang all appeared and we quickly continued on our journey before a monkey war broke loose! Luckily Amanda got her bag back first.

The trail was quite tiring (it’s rated as an advanced walk), lots of steps and steep hills, a very good workout which we needed after all the food we had been eating all week.

In the afternoon, we checked in to a different hotel for one night only before we headed to Malaysia. We stayed in the Marina Bay Sands and there is a lot to say about this place. Enough that it warranted its own separate blog post.

We had booked a coach to take us to Malaysia. It took approximately 6 hours which wasn’t too long as we had some pit stops and the coach was very comfortable so I managed to sleep most of the way. It’s always fun waking up in a new country. Malaysia blog post to follow…

Amanda and I absolutely loved Singapore, so much so that we would seriously consider moving here. It’s so clean, innovative and modern. Now, just need to find a job, house, and learn a bit of Malay!